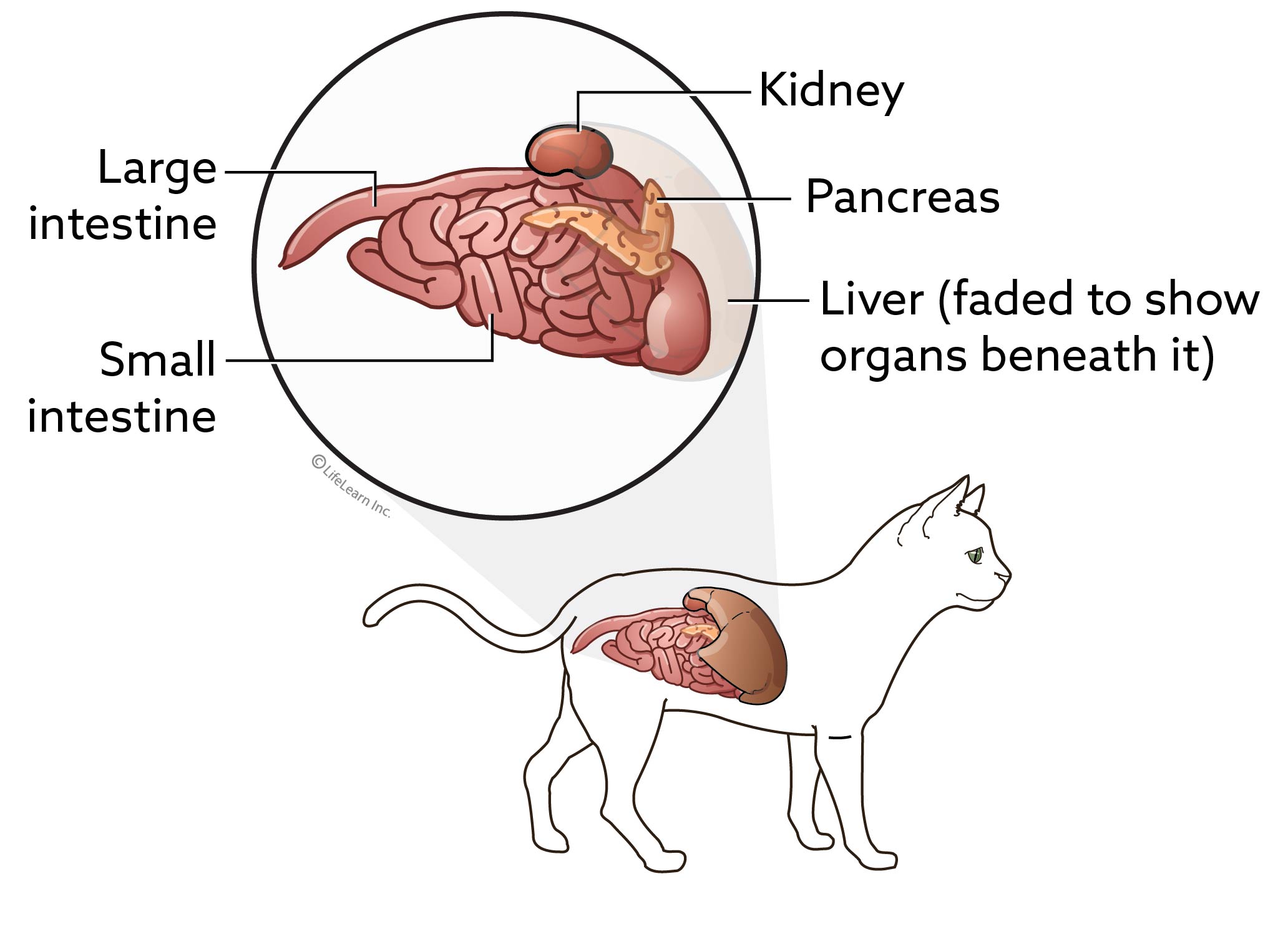 Pancreatitis is a disease caused by inflammation of the pancreas. The pancreas is a small fleshy organ located between the stomach and small intestine. The pancreas has many functions related to digestion and the regulation of blood sugar levels.

"Pancreatitis is a disease caused by inflammation of the pancreas."

In the cat, inflammation of the pancreas is often part of a larger inflammatory condition that typically involves the liver and intestine, as well as the pancreas. Clinical signs are often vague and non-specific, and include lethargy, poor appetite, weight loss, and dehydration. Some cats may have intermittent vomiting or diarrhea, and rarely cats may show abdominal pain.

Can routine tests be used to diagnose pancreatitis in the cat?

Routine blood tests such as the Complete Blood Count and Biochemistry Profile (see handouts: "Complete Blood Count" and "Serum Biochemistry") usually reveal a variety of changes, but these are not specific for pancreatitis; most indicate involvement of other organ systems. Two enzymes that have a small role in diagnosing pancreatitis in the dog, called serum amylase and serum lipase, are not useful in diagnosing pancreatitis in the cat.

Pancreas-specific lipase is a form of lipase produced only in the pancreas. It is highly specific to the pancreas and blood values increase only when there is pancreatic inflammation.

How is pancreas-specific lipase measured? What sample is required?

Pancreas-specific lipase is measured with a test called Feline Pancreatic Lipase Immunoreactivity, known simply as fPLI. The test requires only a simple blood test. A fasting sample is preferred, but it is not essential for the accuracy of the test.

Does the sample have to be sent away to a diagnostic laboratory?

There is now a version of the fPLI test that can be used in-clinic (SNAP fPL© IDEXX). This rapid “pet-side” test takes only a few minutes and gives an indication of whether pancreatitis could be the cause of the pet’s illness. Ideally, the sample should also be sent to the laboratory to get an actual value of fPLI. This will help to confirm the diagnosis of pancreatitis and also provide a starting point or base line that can be used to monitor the pet’s progress after treatment is started.

"This rapid “pet-side” test takes only a few minutes and gives an indication of whether pancreatitis could be the cause of the pet’s illness."

How reliable is the fPLI test?

Can fPLI be used to monitor cats receiving treatment for pancreatitis?

Yes. Pancreas-specific lipase is cleared from the blood very quickly, which means that fPLI can be used to monitor changes in the pancreas in response to treatment. A rapidly falling fPLI value together with improvement in the cat's condition indicates a good response to treatment. The in-clinic test is not as versatile for monitoring pancreatitis, and samples should be sent to the laboratory.

"... fPLI can be used to monitor changes in the pancreas in response to treatment."

Which cats should be tested for pancreatitis using fPLI?

The fPLI test should be considered for:

© Copyright 2017 LifeLearn Inc. Used and/or modified with permission under license.